Andy and Laurie Barber have been happily married for 20 years. He is a successful assistant district attorney;  she is a popular worker at a daycare facility for troubled youth. They both dote on their 14-year old son, Jacob. They live in a lovely house in an upscale Boston suburb. The community is rocked when Jacob’s classmate, Ben Rifkin, is found brutally stabbed to death in a nearby park. Andy is put in charge of the case. Meanwhile, mounting evidence is pointing to Jacob as the murderer. Jacob’s fingerprints are found on Ben’s clothes and  classmates  reported that Ben has been bullying Jacob for some time. Worst still,  Jacob brings a knife to school that is similar to the one used to stab Ben. Throughout all this, Jacob insists he’s innocent.  The Barbers, together with their attorney Joanna Klein, investigate what happened and how best to defend Jacob. Unfortunately, the Barbers are ostracized by the community and the family looks like it will come apart. The twists and turns of the drama will keep you guessing to the very end.

Don’t let some lukewarm reviews deter you. This is a series that will grip you from beginning to end.

DEFENDING JACOB is an addictive murder mystery with terrific performances, some chilling twists and turns, and a shocking finale that veers close to flying off the rails.

From the get-go, DEFENDING JACOB grabs and holds your attention, hour after hour, as you try to figure out whether the kid did it and if the parents are going to make it through the trial without imploding. Everything is doled out in just the right measure to keep you fully immersed in the story. It’s the best Apple original series yet.

END_OF_DOCUMENT_TOKEN_TO_BE_REPLACED 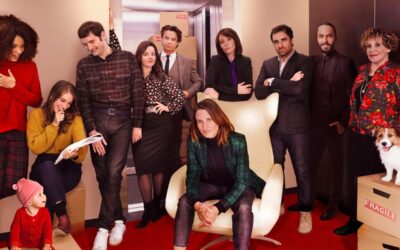