While chasing a fugitive over the rooftops of San Francisco, detective Scottie Ferguson encounters vertigo, falls, and hangs over the side of the roof. His patrolman partner comes to his aid. While trying to assist Scottie, the patrolman plummets to his death. Because Scottie  is racked with guilt and  fearful of heights and vertigo, he retires. Scottie tries to overcome his fear, but his close friend Midge  tells Scottie that the only cure is another emotional shock. Although retired, Scottie’s college friend, Gavin Elster, asks him to follow his wife Madeleine. Elster thinks Madeleine is in some kind of danger.  Scottie follows Madeleine to Fort Point. When she leaps into the bay, Scottie rescues her. The next day Scottie and Madeleine spend the day seeing the sights. They become close. Madeleine suddenly runs to the top of a church’s bell tower. Fearing his acrophobia, Scottie is unable to reach Madeleine. She plunges to her death. Scottie breaks down and is clinically depressed. After he recovers, Scottie returns to the places he and Madeleine visited. While there he notices a woman who resembles Madeleine. He follows her and they meet. Her name is Judy Barton. But, shockingly,  Scottie realizes, in the end, that Elster has been manipulating him. Scottie is determined to find out why Elster hired him. Is Scottie being drawn into a nefarious crime?

Film critic Peter Stack wrote the following: “Perhaps the less people know about VERTIGO the more it can be appreciated. Its mysteries are beautiful and pained, to be savored. In its dark heart, the film is a sorrowful  contemplation of love and the veils that manipulate sexual passions. It is a taste of romantic obsession, of flirtation and deceit. And it is a cold rumination on voyeurism, the heart-racing but somehow the twisted excitement people feel when they spy on others.”

VERTIGO is one of the two or three best films Hitchcock made. There is another element, rarely commented on, that makes VERTIGO a great film. From the moment we are let in on the secret, the movie his equally about Judy (Kim Novak): her pain, her loss, the trap she’s in. Hitchcock so cleverly manipulates the story that when the two characters climb up that mission tower, we identify with both of them, and fear for both of them.

Over time, VERTIGO, the greatest sexual suspense drama ever made, has come to be regarded by many Hitchcock admirers as his most accomplished film.

VERTIGO is an artistic triumph 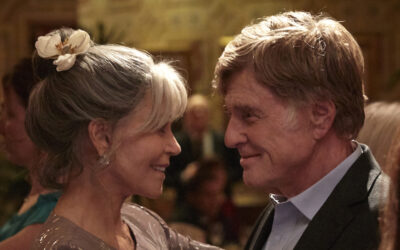 Our Souls At Night

Louis Waters, a widower, and Addie Moore, a widow, have been neighbors for decades but hardly know each other. One day, Addie stops by…