The Grapes of Wrath

An adaptation of John Steinbeck’s Pulitzer-Prize-winning novel of the same name, the film, directed by John Ford, follows the excruciating journey of the Joad family from the Oklahoma dust bowl to a hopefully new life in California. They pack everything into a dilapidated 1926 Hudson sedan and start  their arduous journey on Highway 66. In one of their stopover camps, they meet a migrant who  returned from California. He bitterly tells the Joads that California is definitely not the Promised Land. They arrive in a transient campground but it’s swarming with migrants looking for work. In another camp, they keep little of what they earned because the only store around has inflated prices for food and supplies. At a skirmish at a migrant workers’ meeting, Tom Joad accidentally kills a camp guard. The Joad family is now on the run from the law. They finally locate a camp run by the Department of Agriculture, complete with indoor toilets and showers. Tom Joad is now determined  to join a movement seeking social justice. In the final scene, Ma Joad is not going see her family beaten as she plaintively says “We’re the people that live. They can’t wipe us out they can’t lick us. We’ll go on forever cos we’re the people.”

It’s happening even today—desperate people striving hard to make their lives better, even striving to survive. It’s what makes this brilliant film so timeless.

In the vast library where the celluloid literature of the screen is  stored there is one small, uncrowded shelf devoted to the cinema’s masterworks, to those films which by dignity of theme and excellence of treatment seem to be of enduring artistry, seem to be destined to be recalled not merely at the end of their particular year but whenever great motion pictures are mentioned. To that shelf of screen classics, GRAPES of WRATH was added.

THE GRAPES of WRATH is a left-wing parable, directed by a right-wing American director, about a sharecropper’s son converted to a union organizer. The message is boldly displayed, but told with characters of such sympathy and images of beauty that audiences leave the theater feeling more pity than anger. It’s a message movie, but not a recruiting poster.

The word that comes in most handily for THE GRAPES of WRATH is magnificent. Movies will probably go on improving and broadening themselves; but in any event, this film is the most mature picture story that has ever been made, in feeling, in purpose, and in the use of the medium. 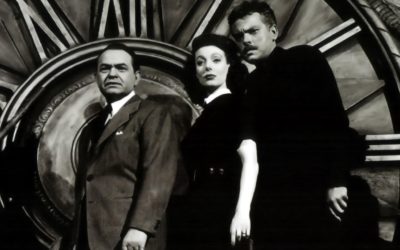 Mr. Wilson of the United Nations War Crimes Commission has been hunting Nazi war criminal Franz Kindler for some time. He hasn’t had much success. So he decides to release incarcerated Nazi criminal, Meinike, hoping Meinike will lead him to Kindler…