Mr. Wilson of the United Nations War Crimes Commission has been hunting Nazi war criminal Franz Kindler for some time. He hasn’t had much success. So he decides to release incarcerated Nazi criminal, Meinike, hoping Meinike will lead him to Kindler. Meinike hooks up with Kindler who has assumed a new identity as Charles Rankin, a prep school teacher in Harper, Connecticut. Rankin’s identity is so well protected that he is about to marry Mary Longstreet, daughter of Supreme Court Justice Adam Longstreet. A repentant Meinike implores Kindler to confess his crimes. Fearing exposure, Kindler takes matters into his own hands. Mr. Wilson, feeling he’s now on the right track, starts working on Mary, who is torn between her fears that her husband may be a monster and her desire to lead a normal life by protecting him. Mr. Wilson pounds away showing Mary footage of Nazi concentration camps and her husband’s role in this horrific genocide. The end, of course, cannot be revealed.

There have been many films, some very good, about Nazi hunters. But The Stranger was the first commercial film to use actual footage of German concentration camps. Welles felt  this was important because in the mid-1940s there were still many Americans who were not aware of the full extent of  Nazi atrocities. It’s a superb film and  a historical eye-opener.

THE STRANGER is a socko melodrama, spinning an intriguing web of thrills and chills. Director Orson Welles gives the production a fast, suspenseful development, drawing every advantage from the hard-hitting script from the Victor Trivas story.

This film gives us one of the cinema’s most realistic and chilling portrayals of a Nazi. Franz Kindler is not a cartoon character in uniform spouting propaganda and clicking his heels. He is an arrogant, cynical, amoral, and wholly self-confident creature who believes that he is superior to anyone he meets. Evil incarnate. A thrilling entertainment.

THE STRANGER is a cunning conspiracy to scare the daylights out of you. A tight script, murky lighting, feverish camera angles, brooding background music, are deftly synchronized to the prevailing mood of uneasiness. All of the acting is well above par. There is hardly a trace of Little Caesar in Edward G. Robinson. Loretta Young is just right as the harassed, threatened bride. And Orson Welles is a convincing menace who richly deserves hissing.

In war-torn Rome, jobs are very scarce. Antonio is lucky. He is offered a job posting advertising bills. However, the job requires the use of a bicycle, which…

END_OF_DOCUMENT_TOKEN_TO_BE_REPLACED 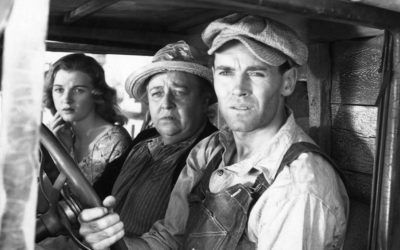 The Grapes of Wrath

An adaptation of John Steinbeck’s Pulitzer-Prize-winning novel of the same name, the film, directed by John Ford, follows the excruciating journey of the Joad family from the Oklahoma dust bowl to a hopefully new life in California. They pack everything into a dilapidated 1926 Hudson sedan…

END_OF_DOCUMENT_TOKEN_TO_BE_REPLACED 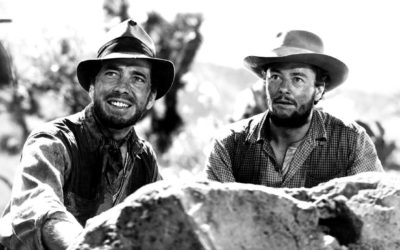