Capernaum, which stands for “chaos,” is about a whip-smart 12-year old boy named Zain, who sues his parents for bringing him into a world filled with slums and poverty. At the trial, the judge asks Zain why he is suing his parents. He answers, “Because I was born.” In a flashback, Zain becomes totally fed up when he can’t convince his parents not to sell his pre-teen sister, Sahar. The arrangement is that Sahar will marry  Assad, the landlord’s son. Zahar is furious and  decides to run away. He ends up in an amusement park where he meets Rahil, an illegal Ethiopian working as a cleaning woman. He agrees to live in her shack in exchange for babysitting Rahil’s infant son, Yonas. When Rahil’s documents expire, she’s arrested. Zain now feels he must care for Yonas, which he does. While in the souk, he meets a facilitator named Aspro who promises to get Zain transportation to Sweden. Aspro requires custody of Yonas and Zain’s ID. Zain returns home requesting his ID. His parents dismiss his request and inform Zain that Sahar died in childbirth. In a rage, Zain stabs Sahar’s husband. He ends up in jail for five years. While in jail, it’s revealed that Aspro was adopting children illegally and mistreating them. The police raid Aspro’s house and Yonas and Rahil are re-united.

How can you resist seeing a film about a 12-year old urchin suing his neglectful parents for bringing him into this cruel world. As he testifies in court, “I’m living in hell.” This distressing film is made more poignant by having an extraordinary cast of non-professionals.

In CAPERNAUM, the heartache of the underprivileged is on such interminable display that you feel the physical hurt in your bones. But the manner in which the filmmaker renders these pains somehow doesn’t feel exploitative or gratuitous—there is a nuanced matter-of-factness even in director/writer Nadine Labaki’s empathy that prevents it to ever become pity.

CAPERNAUM, a sprawling tale wrenched from real life, goes beyond the conventions of documentary or realism into a mode of representation that doesn’t quite have a name. It’s a fairy tale and an opera, a potboiler and a news bulletin, a howl of protest and an anthem of resistance.

The film has an extraordinary, visceral immediacy. That’s because its story is derived from the life experiences of its cast, all of whom had never acted before. CAPERNAUM is a searing, unforgettable work. 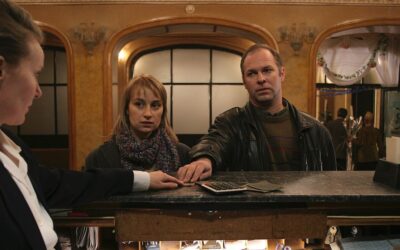