How Green Was My Valley

Huw Morgan is the youngest son in a Welsh coal mining family of nine. His childhood is idyllic: everyone in town gets along; the men working in the mines are adequately paid; and his family is preparing for the wedding of Huw’s older brother, Ivor. At the boisterous wedding, Angharad, the groom’s sister, meets Mr. Gruffydd, the newly appointed pastor, and it’s obvious there is a mutual attraction.  As the men go off to the mines, Beth, the mother and daughter Angharad take care of the house. Problems arise when the mine owner cuts the wages, which results in a furious protest. Gwilyn, Huw’s father, tries to be the peacemaker by not supporting the strike. However, this affects his relationship with his sons. Also, the relationship between the family and several townspeople  is strained. The hard liners believe the only way to restore their wages is to strike. It’s the only language the owner will understand. The idyllic, peaceful life of the village will never be the same.

Arguably one of the greatest films ever made. One could easily relate the misfortunes endured by a mining family in Wales  with families in Appalachia in the U.S.

Out of the homely virtues of a group of Welsh mining folk—and out of the modest lives of a few sturdy leaders in their midst—producer Darryl Zanuck, director John Ford and their associates have fashioned a motion picture of great poetic charm and dignity, and one that may truly be regarded as the outstanding film of the year.

END_OF_DOCUMENT_TOKEN_TO_BE_REPLACED 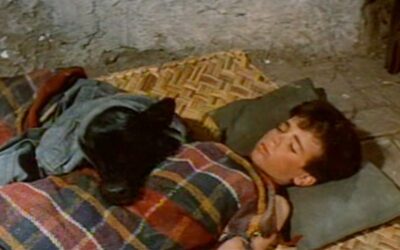 A cow that just calved is killed in a storm…