A burnt-out, penniless, British writer, Alan Squier, wanders into a roadside diner in the Arizona desert. The diner, located at the edge of a petrified forest, is managed by Jason Maple, his daughter Gabrielle, and Gramp, Jason’s father. Gabrielle’s mother abandoned her when she was a child and moved to France. She keeps in touch with Gabrielle by sending her  letters and poems. Gabrielle now dreams of leaving the depressing diner and moving to France where her parents first met after World War I. Alan regales Gabrielle about his years living in Paris, writing a novel, and living the bohemian life. Gabrielle is smitten. Meanwhile, Duke Mantee, a dangerous gangster fleeing the police, storms into the diner. Duke’s plan is to rendezvous with his girlfriend Doris and flee to Mexico. But Doris is captured by the police and reveals Duke’s location. While waiting, Alan engages in conversation with Duke calling him “the last great apostle of rugged individualism.” Realizing  the police are closing in, Alan has an idea: He changes the beneficiary of his life insurance policy to Gabrielle. He then urges Duke to shoot him. This will provide Alan with two worthwhile legacies: He will die nobly and he will help Gabrielle fulfill her dream of living in France.

On film posters, the big stars at the time, Leslie Howard and Bette Davis, are in big type and located above the film title. Humphrey Bogart is in small type located below the film title. Actually, Humphrey Bogart was not slated to get this role. Warner Bros. wanted a bigger name like Edward G. Robinson. Bogart played the role in the stage version with Leslie Howard. In an act of utmost generosity Leslie Howard gave Warner Bros an ultimatum: “I refuse to play in the film if you do not cast Bogart in the role of Duke Mantee.” Bogart did not become a big star after this film but Hollywood began to notice him. He would reach stardom in the 1941 film High Sierra. Bogart was so grateful to Leslie Howard that Bogart named his first daughter, Leslie.

THE PETRIFIED FOREST served as a good acting vehicle for the three leads, Leslie Howard, Bette Davis, and especially Humphrey Bogart, in a breakthrough performance. All three would achieve greater heights of skill and popularity in future movies.

Due to the scowly presence of Humphrey Bogart, THE PETRIFIED FOREST would later be considered as one of the decades great gangster films.

Vincent Parry, convicted of murdering his wife, manages to escape from San Quentin Prison. Irene Jansen gives him a lift and smuggles him past a police roadblock. She offers him shelter…

END_OF_DOCUMENT_TOKEN_TO_BE_REPLACED

Walter Neff, a successful insurance agent, is in his office dictating a confession for a crime he committed. The whole story is now  revealed in flashback. It begins with Neff visiting the Dietrichson home…

END_OF_DOCUMENT_TOKEN_TO_BE_REPLACED 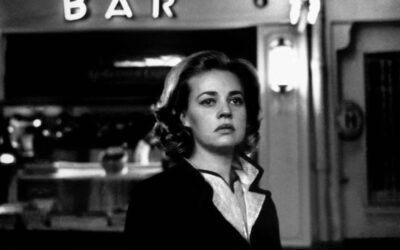 Florence Carala and Julien Tavernier are in love. The problem is Florence is married to Julien’s boss, Simon Carala…