LA BAMBA is a musical bio of the life of 1950s rock ‘n’ roll phenom Ritchie Valens (born Richard Valenzuela). At age 17, he makes it big with two songs, “La Bamba” and “Donna,” that reach the top of the “Billboard” chart. However, Valens’ life is not easy dealing with Connie, an aggressive mother, and Bob, his alcoholic, mean-spirited brother. Valens falls for a  pretty and blonde classmate, Donna.  But her father is enraged seeing his daughter cavorting with a Mexican- American. With success, Valens joins the ill-fated Winter Dance Party tour with Buddy Holly. They take off in a plane during a snowstorm for a gig in Ohio. Before the flight Ritchie calls his brother and they make up. The next day, while Bob is fixing his mother’s car, he hears the news bulletin about the plane crash. He races to comfort his mother. He finds her standing immobile, no emotion, but buried within her, is a grief she’ll never overcome.

Valens died at age 17 just eight months after signing his first recording contract. Two years before his death he was a Mexican- American fruit picker in Northern California. But success never went to his head. He cared and sang songs for the impoverished  school kids, bought his mom a home, and respected and loved his girlfriend. He didn’t do drugs, drink excessively, gamble, or abuse people. How tragic that his life should end so early. But we do have this marvelous film to remind us that a person rising from rags to riches can still remain a decent human being.

LA BAMBA, with its unabashed only-the-good-die-young mythology, is also a glorious, drug-free shot in the arm of romantics. And at an Alan Freed anniversary show, when Ritchie Valens gets the crowd to its feet with the title song, LA BAMBA reaches its warm and sentimental peak.

It’s a sad story, but LA BAMBA doesn’t make the mistake of being morbid. It concentrates instead on Valens’s nice-guy side and on his love for rock-and-roll. A film like this is quite naturally a showcase for its star, and as Valens, Lou Diamond Phillips has a sweetness and sincerity that in no way diminish the toughness of his onstage persona.

LA BAMBA is engrossing throughout and boasts numerous fine performances. In Lou Diamond Phillips’ sympathetic turn, Valens comes across as a very fine young man, caring for those important to him and not overawed by his success. Carousel is a tragic romance between Julie Jordan, a naive but loving factory worker, and Billy Bigelow, a ne’er-do-well carnival barker. They fall instantly in love and marry…

END_OF_DOCUMENT_TOKEN_TO_BE_REPLACED

Loretta Webb was one of eight children born and raised in Butcher Hollow, Kentucky. Her father, Ted Webb, was a coal miner The family was dirt-poor. Loretta was 15…

END_OF_DOCUMENT_TOKEN_TO_BE_REPLACED 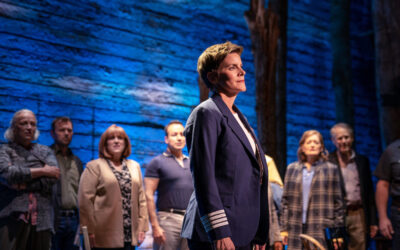 “COME FROM AWAY is the filmed version of the award-winning Broadway musical which tells the story of 7,000 people stranded in the small town of Gander, Newfoundland after all flights to the U.S. are grounded on September 11, 2001…