The 918th Bomb Group, flying missions over Germany during World War II, is experiencing heavy losses. Known as the “hard luck group,” they are commanded by Colonel Keith Davenport. Davenport is at this time exhausted and demoralized with these losses. The last straw for Davenport comes when he’s  ordered to fly much lower to hit the targets accurately.  Major General Pritchard decides to replace Davenport with Brigadier General Frank Savage. Savage is harsh with his men, and they begin to miss the easy-going ways of Davenport. All of the Squadron’s pilots apply for a transfer. Savage asks the Group Adjutant, Major Stovall, to delay processing their applications. On one mission, the group is ordered to return to the base, due to bad weather. Savage ignores the warning and successfully completes the mission. Savage receives bad news: an Inspector General staff member is arriving to investigate Savage’s conduct and the reasons for the mass transfer requests. The pilots, in an emotional turnaround, support Savage. But these dangerous missions and the stress of commanding his men, have  taken a toll on even a strong-willed man like Savage.

Veterans of the heavy bomber campaigns during World War II, including General Curtis LeMay, the Commander of the Strategic Air Command, commended this film as accurately depicting the human toll endured by these heroic crews. It’s what makes this a different type of war movie. Given the almost suicidal task of low-flying bombing raids over the heart of Germany, these bombardiers certainly deserve a huge bit of credit for the winning of the war. It’s a film with a superb cast, incredible footage of air warfare, and directed superbly by Henry King.

As a drama, TWELVE O’CLOCK HIGH deals soundly and interestingly with its situations. It gets close to the emotions in unveiling its plot and approaches it from a flashback angle so expertly that the emotional pull is sharpened.

TWELVE O’CLOCK HIGH is a terrific war movie, one more concerned with the toll combat takes on men than any fleeting glory it might bring. It’s a war movie with more soul and depth than I’d have ever guessed capable of Hollywood of that era.

This tremendously vivid fictional story of a young general, who, toward the end of 1942 takes command of a bomber group operating from a base in England and elevates it from bleak depression to a peak of aggressiveness and pride, has conspicuous dramatic integrity, genuine emotional appeal and a sense of the moods of an air base that absorbs and amuses the mind. The terrible tension of the bomber crew while on a mission, the breathless action of attack and repulse and even the anxiety of the ground crews are finely realized.

END_OF_DOCUMENT_TOKEN_TO_BE_REPLACED 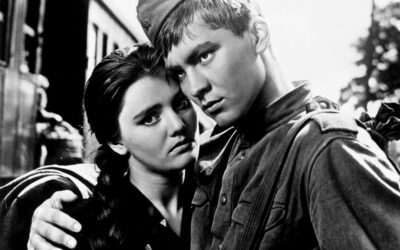