In 1945, shortly after World War II ended, an Orthodox Jew,  Sámuel Hermann, and his son, return to  their home village in rural Hungary. They bring two trunks   containing perfumes and lotions. The locals are fearful  these two former inhabitants might claim their homes and all their personal possessions that were illegally confiscated  during the war years. There is also fear that the perfumes and lotions Sámuel and his son are carrying will be used to stock their stores that were confiscated. The villagers feel both guilt and greed.  The imperious town clerk, István, is defiant, claiming  all that was confiscated should not be returned. The village drunk, wracked with guilt, insists that everything taken from the Jews should be returned. A dark cloud hovers over the town as they grapple with their dishonorable past.

It’s rare that such a worthy film, still running in theaters and nominated for 10 Oscars, is also available for streaming.

Filmed gorgeously in black and white and often framed with wide vistas. The final moments unharness a subtle power: This is a town that cannot escape its past and a dark cloud will hover over it for years to come.

As a compact study of wartime guilt, the film has the look and feel of a waking nightmare.

Rahim is given a two-day leave from an Iranian debtor’s prison. Rahim borrowed money from a loan shark and was unable pay it back when it came due…

END_OF_DOCUMENT_TOKEN_TO_BE_REPLACED

A Kind of Loving

END_OF_DOCUMENT_TOKEN_TO_BE_REPLACED 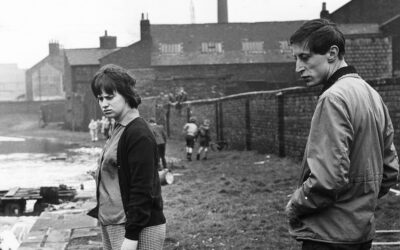